[The photo above shows a bilateral en bloc capsulectomy.  Both capsules have been removed intact with the breast implants within.  See the photo below the text which shows the implants separated from the capsules]

Can breast implants cause systemic illness?  Many patients, physicians, and scientists think so, but to say this is a controversial topic in the world of plastic surgery would be a huge understatement.  Plastic surgeons run the gamut from believers to nonbelievers, while many in the middle just try to avoid the issue.

Breast implants have been around for several decades and have evolved in many ways, but questions over the effect to the body from the silicone or its components have returned.  After a storm of litigation beginning in the early 1990s, silicone gel-filled breast implants were removed from the cosmetic surgery market during the so-called breast implant moratorium.  After intensive reviews from regulatory bodies, physicians and scientists, silicone filled breast implants were allowed back on the cosmetic surgery market in 2006.  Their return to market carried additional regulatory conditions, involving implant monitoring, manufacturer reporting, and patient education.  However, the reviews and studies that provided the basis for the return have been criticized for their bias and limitations.

Symptoms of Breast Implant Illness (BII) are many, but common ones include poor mental clarity (“brain fog”), headaches or migraines, blurry vision, hair loss, numbness and tingling, and aches and pains.  Less common problems include rashes, gastrointestinal disturbances, and bladder irritation.  The challenge for researchers and clinicians is that objective tests have not (yet) been found that confirm BII.  It is well documented that 70-80% of patients with BII improve after removal of their implants and the capsule around them (the so-called en bloc capsulectomy).  That success rate is not controversial, but what is controversial is Why?  Many experts, including many if not most plastic surgeons think this is purely a nocebo effect (kind of like a placebo effect, but opposite), and view the condition with derision.

I do believe that BII is a real condition, although that doesn’t rule out the possibility of a nocebo effect in some women.  There is plenty of plausible science in the realm of epigenetics, toxicology, and adjuvant disease to implicate silicone, other components of the implant, or contaminants to explain the conditions.  Assuming an autoimmune-like process, the mechanisms of harm are theorized, but causality will unfortunately require further effort to studies these possible effects.  There is some progress being made toward these aims in Europe and the U.S., but in my opinion not enough.

BII triggers emotional responses from both believers and nonbelievers.  The vitriol on social media against implants, surgeons, and manufacturers is no worse than the attitude from many surgeons that women with BII are crazy.  Science will sort this out, if supported and conducted in an objective and unbiased way.

I treat many women with BII and occasionally I am asked why, if I believe that BII is a real illness, do I still put breast implants in?  I believe that most women with breast implants, whether placed for reconstructive or cosmetic purposes, do well.  I do not believe as some patient advocates do, that implants should be banned, but I do believe women should know about BII as part of the informed consent process.

Patients should be aware that no implant lasts forever, and that long-term follow-up is necessary, including MRI surveillance for silicone implants.  I believe a woman with a strong family history of autoimmune problems should be steered away from implants, though I will not claim solid evidence to support this.  As a plastic surgeon who is experienced in seeing and treating BII patients from all over, I feel I have better awareness of BII symptoms than a surgeon who places implants but thinks BII is bunk.  This is an advantage for my own breast implant patients.

If you are a woman with breast implants and suspect you may have breast implant illness, be sure to seek out a plastic surgeon who is experienced in the treatment of BII.  If you have implants and have developed illness for which your primary care physician and specialists have been stymied in their attempts at diagnosis (not an uncommon scenario), quiz them about your implants.  If they're unwilling to consider the implants, you may want to consider different doctors.

[The photo below shows the breast implants removed from the capsules, and the capsules beside them.] 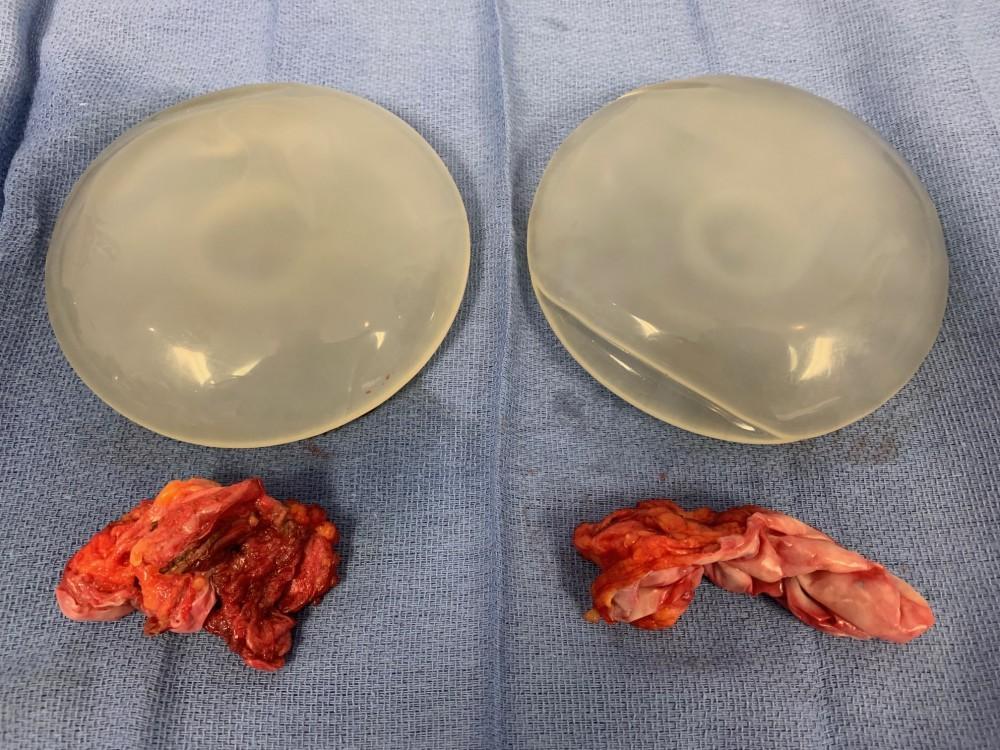 HydraFacial is a treatment that removes dead skin cells and extracts impurities while simultaneously delivering the skin with cleansing, hydrating, and moisturizing serums.