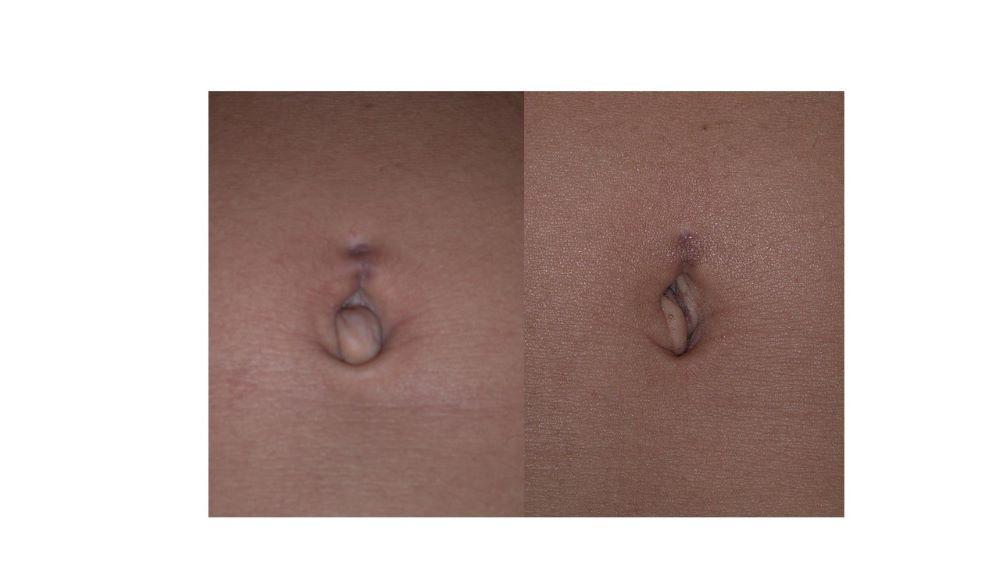 Did you always have an innie until you got pregnant?  And then maybe that outie never went away?  That's an umbilical (belly button) hernia.  Sometimes its barely noticeable, but somewhere short of marble-sized, everyone on the beach is going to start to notice.

Hernias are defects (holes) in the abdominal wall where the stuff on the inside bulges through to the ouside.  The umbilicus is a common spot.  Most umbilical hernias can go back in with a gentle push of a finger, but usually come right back out.  These are considered "reducible".  Some umbilical hernias get stuck and can't be pushed back in, at least not easily.  These are called "incarcerated", and they can be bad.

Somewhat counterintuitively, it's often the smaller hernial defects that tend to cause incarceration. The giant ones that a baseball can fit through rarely get incarcerated. If the bulging tissue gets irritated, or strangled by the hernia opening, it can swell, creating a vicious cycle that can lead to ischemia (lack of blood supply) and gangrene.  This of course is a surgical emergency, especially if that ischemic tissue includes intestines.

Hernias are often uncomfortable, but pain can sometimes indicate ischemia.  Extreme or worsening pain is an emergency until proven otherwise.  It can be a wise decision to deal with the hernia when it's small and not yet causing problems.  The surgery can be done with a small incision within the umbilicus, often under local anesthesia.  It is also common (and makes a lot of sense) to fix an umbilical hernia during an abdominoplasty (tummy tuck).

Complicated hernias, including large or recurrent ones need a bigger open or laparoscopic surgical procedure and often involve placing internal mesh to support the abdominal wall.  This is usually done by a general surgeon, not a plastic surgeon.  But if you have a small hernia that's bothering you, give us a call.